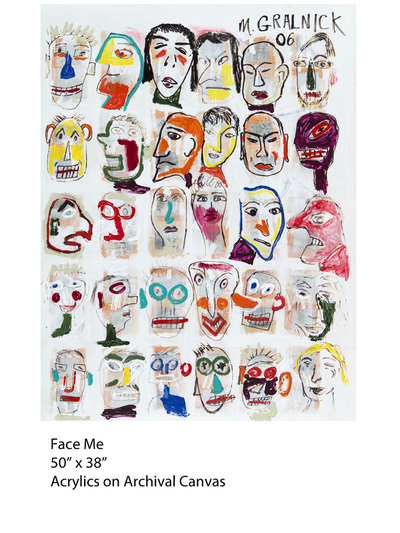 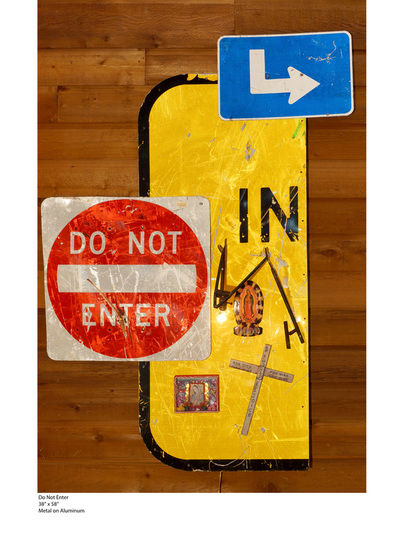 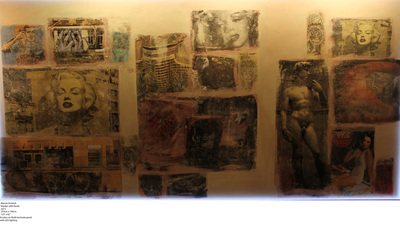 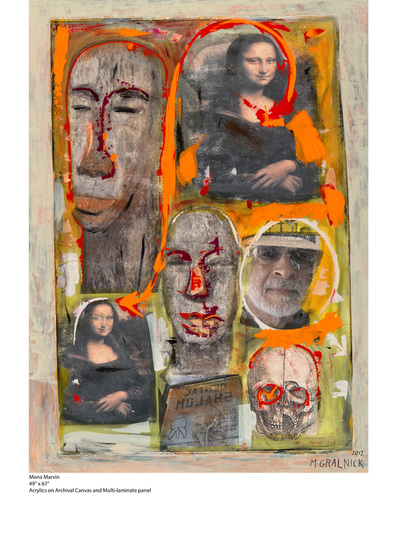 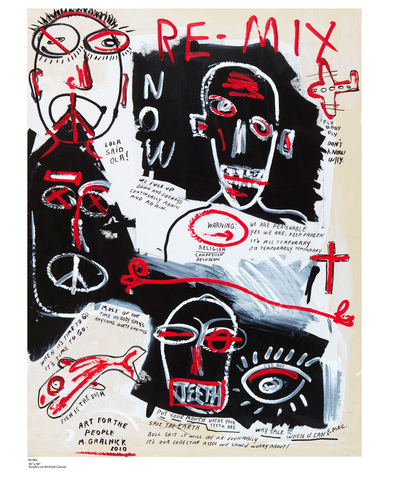 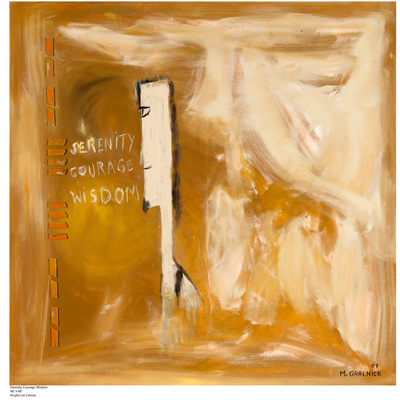 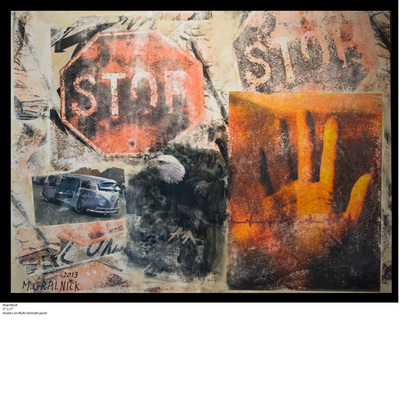 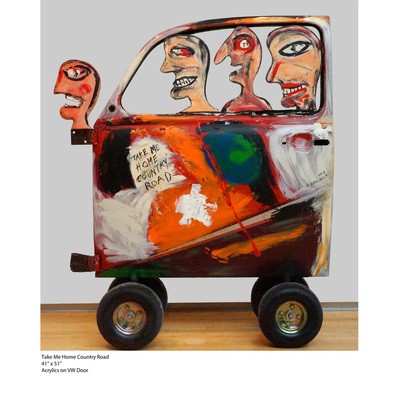 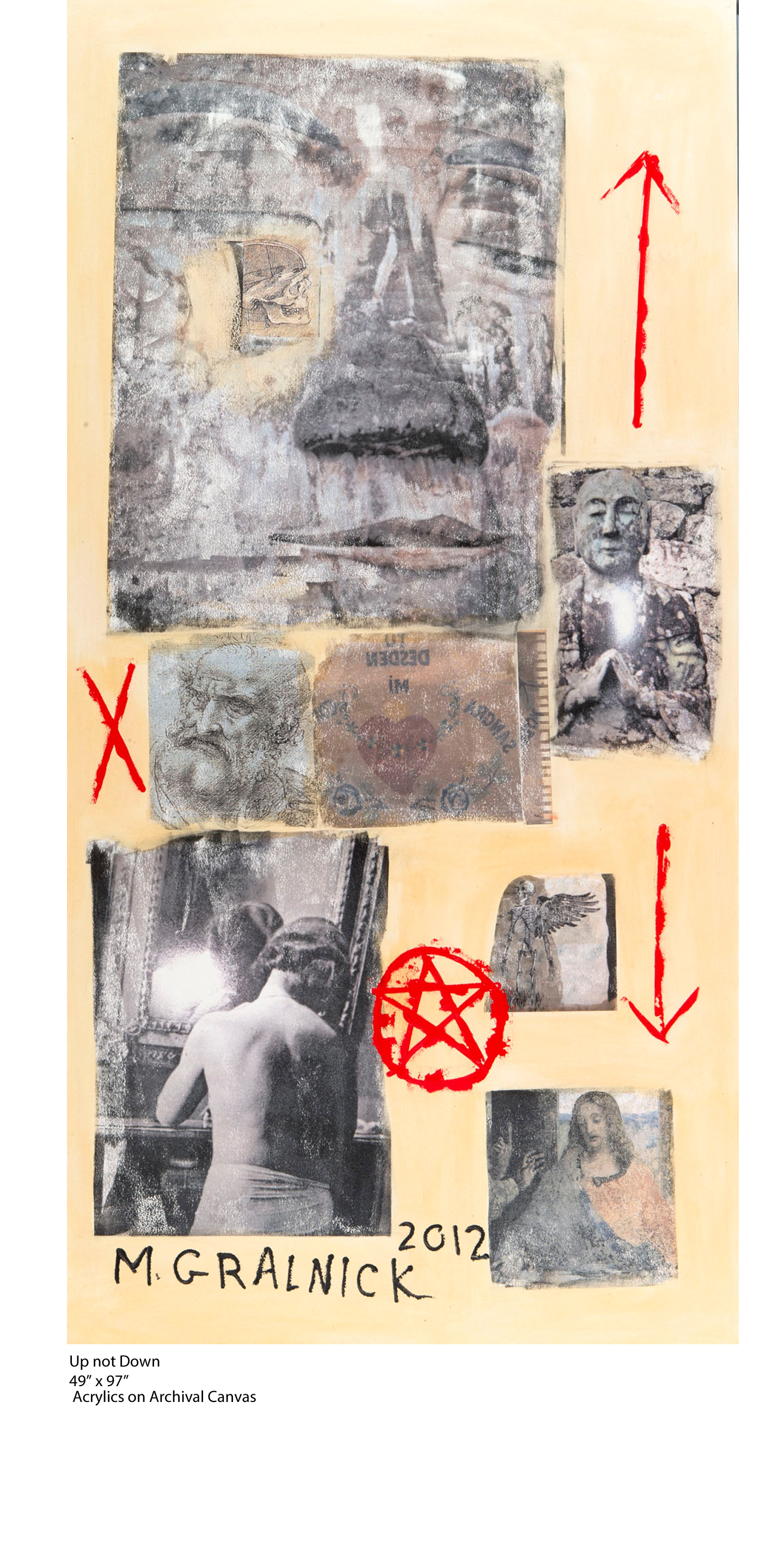 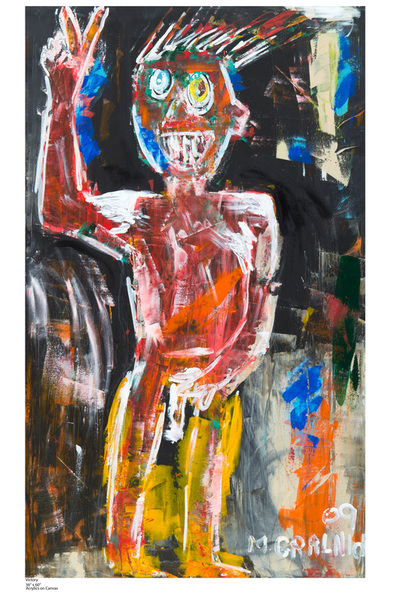 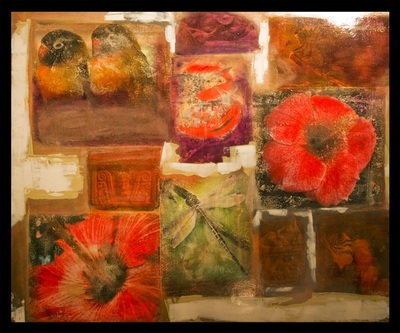 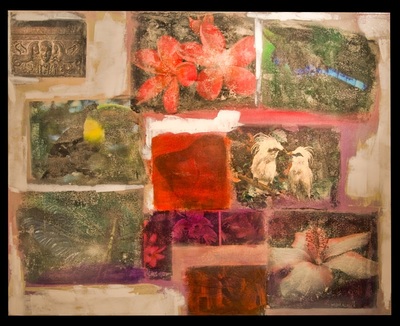 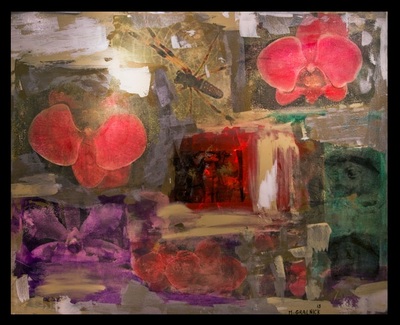 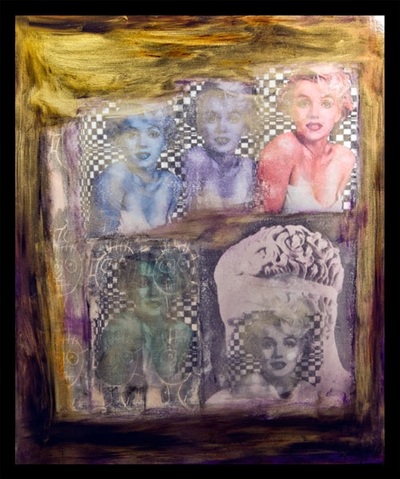 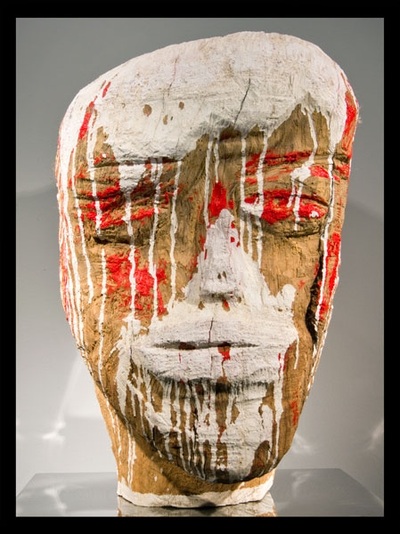 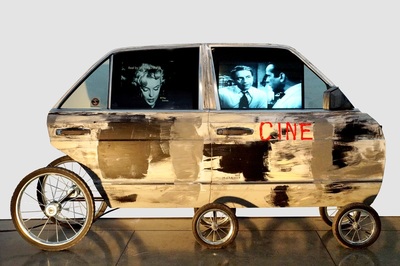 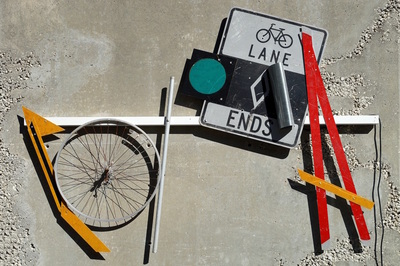 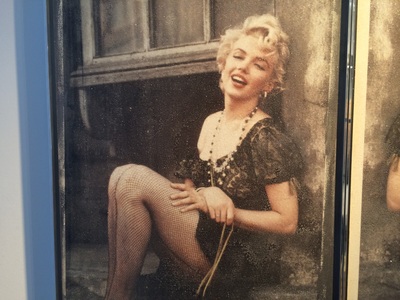 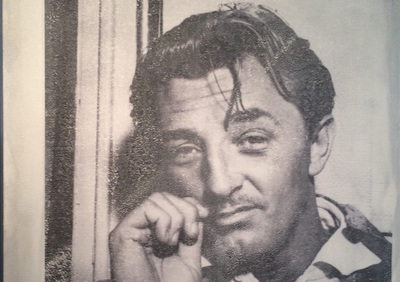 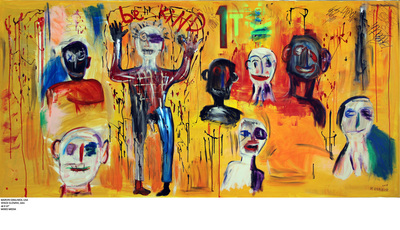 The dynamic art of southwest Florida artist Marvin Gralnick draws on twentieth-century modernism, Abstract Expressionism, Pop Art, Neo-Expressionism, and Post-Modernism which he assimilates into his singular vision for a new century. He has drawn inspiration from such modern masters as Picasso, Miro, Dubuffet, Pollock, Rauschenberg, Warhol, and Basquiat. Gralnick's mythologizing of the American culture is based on specific people, events, locations, objects, and creatures which he often enlivens with evocative words and catch phrases. The diversity and range of his images cross boundaries of high and low art, age, race, and class. His perceptive imagination reflects a culture glutted with massive amounts of information and boundless material surplus.The image overload of his pictures tends to elevate American popular culture to the status of high art. In his attempt to analyze multiple spheres of life, social consciousness is tempered with social satire. Gralnick's exploration of individual human relationships is frequently presented within a larger historical or sociopolitical context.

As Gralnick's visual and verbal vocabulary of images migrate from painting to painting, certain categorical subjects repeatedly emerge, such as the following: the cult of celebrities, both real and fictional, from Marilyn Monroe and bathing beauties to Captain America; historic sociopolitical leaders from Lincoln to Zapata, Fidel Castro, Martin Luther King to President Obama; consumer products such as Ford and Lincoln classic cars, bicycles, boats, airplanes to vintage advertisements for Coke, cigarettes, and fried chicken; familiar world-class artworks from Michelangelo's David and Leonardo's Mona Lisa to ancient and tribal sculpture; biological specimens from barnyard animals,birds, and insects to radiant trees and flowers; symbols ranging from the cross to Lady Liberty and the stars and stripes. All of these topics are selected from the wealth of appropriated material that mechanical reproduction and digital media have made abundantly available. Interspersed with this flood of visual images are clever and often humorous words and phrases which deliver a mental jolt, underscoring the artist's ironic point of view. The themes which reoccur most frequently are those which have the most pressing personal meaning for Gralnick, giving the body of the work density, texture, and an internal harmony.

Gralnick's pictures of his natural environment attest to his sympathetic curiosity for the flora and fauna of the fragile ecosystem of southwest Florida. His botanical and zoological subjects: exotic birds, lush plants, flowers, and insects are silkscreen images which are photo transferred onto brightly vibrant canvases. In his flower series, orchids and hibiscus glow with electronic colors while other series include bizarre insects such as dragonflies or floridan spinning spiders. The aviary series, depicting magnificent egrets and cranes, reveal his delight in the grace and powerful presence of these strange creatures. All of the nature works bespeak Gralnick's maxims: "Be kind - Do Good" and "Be Kind to One Another."

In the figural works, the forms are often partially obliterated or swallowed up by their surrounding backgrounds. In these paintings he follows his penchant for breaking up reality into fragments in order to recombine the various parts into a unique entity. These compositions are notably branded with his own eccentric personality. He plays with tradition by juxtaposing images of reality and fantasy, setting up confrontations between static, crisp contours and blurred forms which suggest movement. This Dada inspired approach brings together seemingly unrelated elements in a single work, divorcing the images from their original context.

In addition to experimenting with different ways of applying paint--variously splattering, brushing, smearing, and squeezing directly from the tube--he has perfected the depersonalized industrial technique of photo transfer. These photo silkscreen paintings contain deliberate imperfections, revealing the uneven inking of the roller, slips of the screen, and an overall graininess and partial blotting out of images. In all his work Gralnick conveys a passion for kinetic strokes of color, provocative words and arresting images which embody the American dream filtered through the raw lens of popular culture.

In the 1940’s the French artist Jean Dubuffet invented the term Art Brut meaning “raw art” or “rough art.” It referred to work made by artists outside of the academic art world who responded directly to human life and feeling and were open to the spontaneous use of unconventional materials and techniques. In the 1980’s the Graffiti artist Jean-Michel Basquiat combined qualities of this raw expression with the urban phenomenon of graffiti on the streets of New York City, addressing himself directly to the public. Inspired by his individualistic poetic and communal energy, Marvin Gralnick’s paintings are deeply influenced by Basquiat’s urban primalism not only in how they mix written messages and images with uninhibited brushwork, but also in how they express the immediacy of disorientation in our everyday lives stemming from politics, commercialism, and distorted social values.

For over 13 years Gralnick has covered his canvases with scribbled figures, schematic skulls, and faces with gritted teeth that ooze tension and fear. They are accompanied by painted phrases of sardonic observations that confront the viewer with uneasy and biting humor. What R U looking at? What is it about NO you don’t understand? The end is near watch your rear! Don’t just stand there do something! Greed baby greed- all the incentive they need! I’m talking - are you listening? It’s important because I didn’t say anything! His people wear exaggerated expressions, pop eyed with confusion, sometimes rendered with coarsely blemished faces that emerge from crudely scraped swaths of paint. There is amusement in the chaos and confusion of his graffitied caricatures until we recognize them as a reflection of our own frustrated contemporary lives. Gralnick expresses the mixed-up disorientation of the urban mind in much the same way that Basquiat did – filling the background with roughly rendered blocks of paint or unpredictable abstract expressionist gestures, jotting his phrases and hapless figures into stormy chaotic spaces. With great irony a man screams the words Happy New Year 2012 exuding cartoonish terror at what the New Year will bring. In another painting a neon green figure on a blazing red background says I’m mixed up, I need help! The cynical answer commands Lock ‘em up! The reality of the social message is conveyed with speed and immediacy, true to graffiti’s informal public reality and impact. A number of paintings outwardly declare this truth- Art for the people.

Another artist Gralnick admires is the contemporary German Neo- Expressionist Georg Baselitz, well known for his bold expressionist paintings of tragic and disquieting human figures. Gralnick’s wood carving First Man is inspired by Baselitz’s approach to his roughly hewn wooded sculpture. The oval eyes and closed lips of a primeval face emerge out of a hardwood block, daubed in red “war” paint on the eyes and cheeks. White house paint is unceremoniously dumped on the top of the head trickling down in streams across the face – a gesture that is at once derisive, raw and primordial. With uncanny feeling for expressive truth First Man contrasts the primitive crudeness of man’s fundamental nature with the pathos of his tragic strivings.

When taken as a whole the contentiousness of Gralnick’s work serves to jolt his audience out of complacency and apathy about the state of contemporary life and human nature. This attitude is in accord with other works that carry more direct philosophical advice. Man dies, awaken now! Say what you mean, mean what you say! We see things as we are, not as they are! A cut metal sculpture of a standing human figure with painted words covering its body expresses the struggle of achieving compassion and self-understanding. At birth man is an animal, at twenty a lunatic, at thirty a lost failure… But then the tenor changes…at 60 a master with the courage to trust yourself. A bird shaped head states the simple truth Love one another, that’s all there is. The compassionate symbols and words of Buddhist philosophy appear in numerous paintings. With our thoughts we make the world. Happiness flows from a peaceful mind. The presence of a painted heart shape in many of Gralnick's paintings, symbolizes this need for self-understanding and compassion, particularly in the midst of chaos and difficulty.

The artist’s home on Captiva Island, Florida brought him into contact with the famous artist Robert Rauschenberg, who had a large working studio on the island for many years. Rauschenberg’s well-known photo emulsion transfer technique and his use of high technology printers became important additions to Gralnick’s graffiti imagism. Photo transfer images add subtlety and depth to his painted surfaces, often reflecting a sense of cultural memory and personal experience. The pictures of birds and flowers in his Cloud Forest series flow with a lyricism and color that celebrates the lushness of tropical nature. However most of his paintings combine the tension between clusters of collaged photo transfers and shrill graffiti mark making. Associative imagery is grouped together, merging nostalgic iconography with contemporary images to express collective popular experience. In one painting a large picture of Obama looks outward from the top of the canvas, in proximity with the pop icons of Captain America and the Statue of Liberty. From below Martin Luther King looks up toward Obama as a shrill conscience reminding him of the necessary to pursue justice and equality in today’s corrupt and unfair society. Surrounding the images are bold slashes of flag colors in red white and blue which add a jarring sense of immediacy and urgency. Gralnick continues this confrontational social irony in the painting America, depicting a photo of the American Flag with pictures of walls filled with graffiti tags and cartoon characters culled from decaying city walls. A painted scribble of a cartoon head gritting its teeth is placed next to the crudely scrawled word America. The photo transfers are framed in bright yellow brushstrokes, making the space intense and pulsating, jumping with chaotic energy.

Gralnick’s approach to Graffiti using combined techniques reflects his direct experience of life and his consciousness of humanity. His declamatory statements in expressive paint, true to graffiti tradition, vocalize his concern about public complacency with inhumanity and the urgency of waking up to assess the deeper meaning of life. Through his consciousness of human nature Gralnick’s paintings repeat a simple phrase over and over -Be Kind. Compassion, wherever it can be realized, brings possibility for oneself, for one’s fellow man, and for the world.