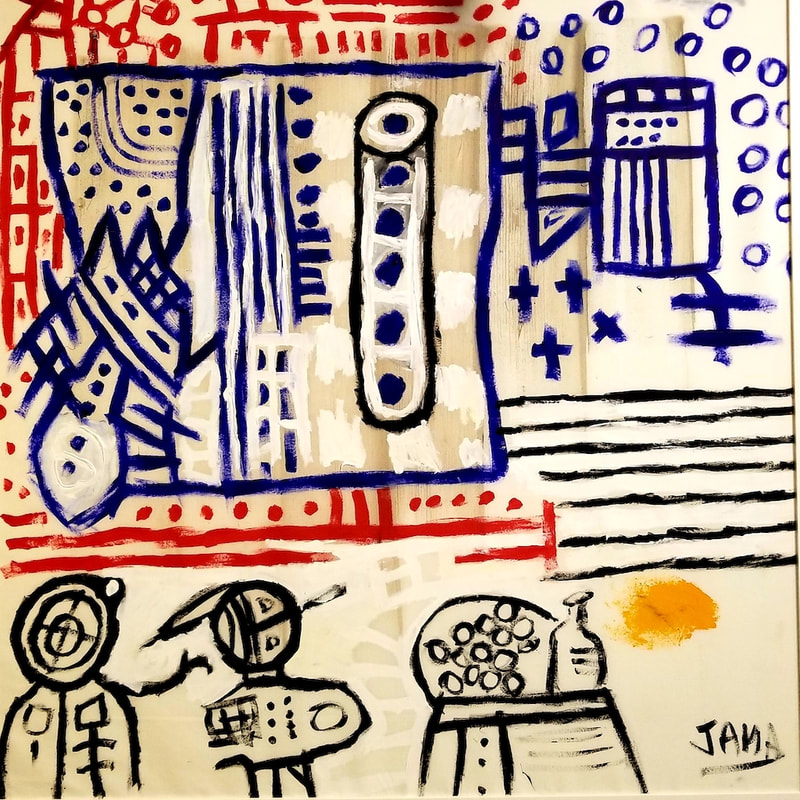 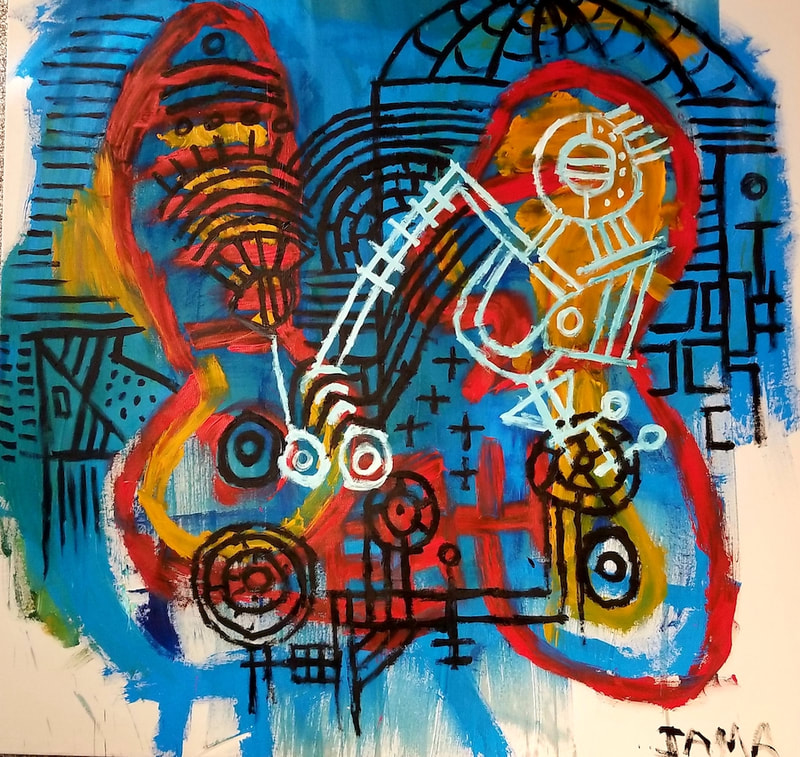 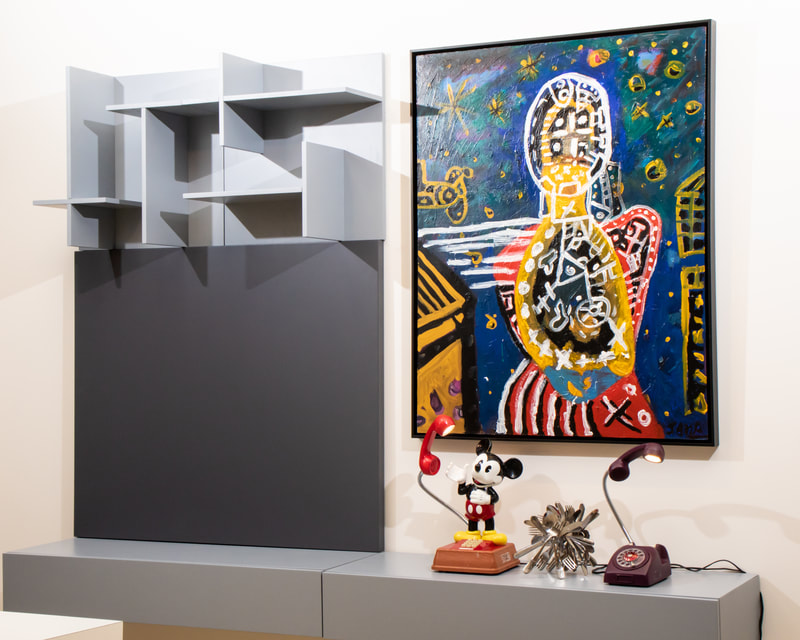 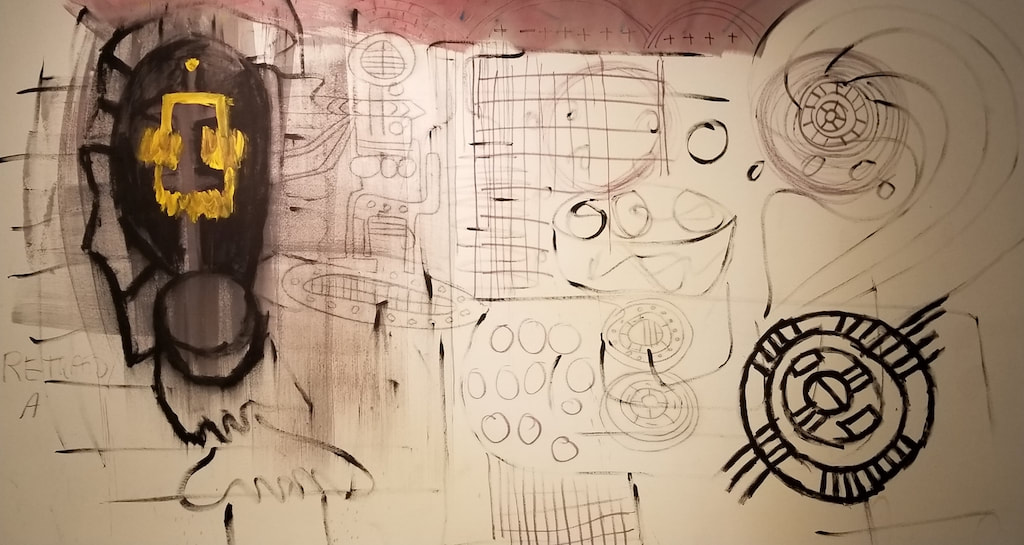 JAMA's work is often associated with the work of Jean Michael Basquiat. He is also considered a Post Neo-Expressionist painter. His style is a combination of both, art that looks outsider (primitive) mixed with urban graffiti.  JAMA is also associated as a pop artist, as is Andy Warhol. 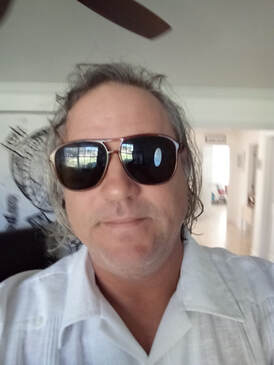 Creation, not the result of human intelligence, intelligence is a result of the creation, implosion theory and geometric explosion,  in which the decomposition of the form go beyond the known forms by humans proves so, and teach that anarchy and order, are two inseparable brothers, the forms are infinite, the iguall that the numbers, and only matter can be numbered. Jama , creator of the new virgin theory, the geometric implosion and explosion :

Jose Andres Mato Alonso, (JAMA) was born in Cuba on August 26, 1974 in the City of Guines in Habana. Since he was a child, at the age of six, his father would take him to visit family members and friends, and to keep him entertained and occupied, he would ask him to draw pictures of them, says Jama.

In 1994 he enrolled in the University to study Sciences. There, surrounded by artists, poets, mathematician, writers, musicians and biologists, and enthusiastic about learning the secrets of the universe, he changes to Geography. This change will help him have a broader vision of nature, of how to be a more social man, and wherein he will create his proper style influenced by the philosopher, Aristotle and his book of logic (The Organon).

In 2002 he arrives in Costa Rica, and establishes himself there for two months giving himself the opportunity to share and assist in various expositions, until he arrives in Miami on August 19th of the same year. Once in Miami, encouraged by the characteristics of such a cultural city, and in the midst of the current mixtures of different artistic tendencies, Jama understands the real value of art, position and function for humanity.

Along with other artists he co-founds a group called Art Factory. After a year and a half later he leaves the group to establish himself in ART+, owned and manage by internationally renowned art collector and dealer, Devra Arman and Jean Bernard. located in Coral Gables Miami fl USA, where he had his _first solo exhibition and which later he will share the walls with Andy Warhol, Daly, George Braque, Keith Haring, Clyde Butcher, Roberto Mata, Guy le Baube, Arman, and others.

By 2008, Jama becomes the director of Rene Gallery in Little Havana, Miami, Florida, until he moves to Naples, Florida on January 1st, 2010, where he receives the warm welcome and assistance from his friend John Parke Wright, IV. In 2011 he receives the Face Award in the art category in Southwest, Florida. He also participates in the exhibition, Cuba on my Mind, at the Von Liebig Art Center, organized by the respectful Mr. Joel Kesler and Jack O’Brien.
JAMA works is Today in different cities of the world, like New York, Miami, London, Cannes, Nice, Paris, Tel Aviv and others.

He started painting at an early age and left Cuba in 2002.

Murals in Guines, a seven-mural project outside the city limits. Habana, Cuba.

Mural at the Patio of the Universal Art Gallery, Habana, Cuba

2014 to Date, JAMA is exclusively represented by the Aldo Castillo Gallery