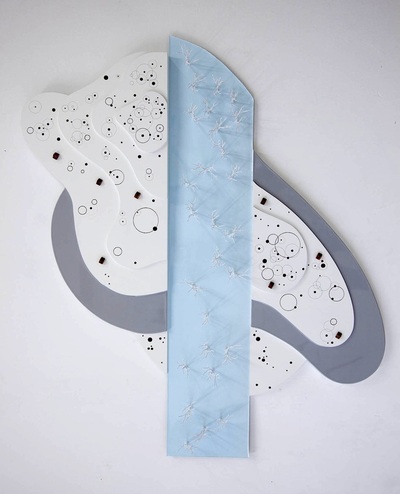 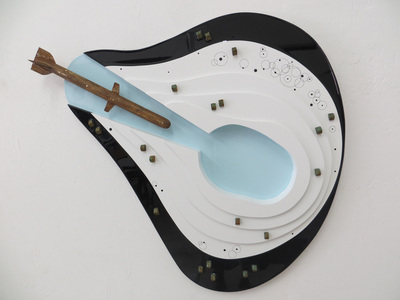 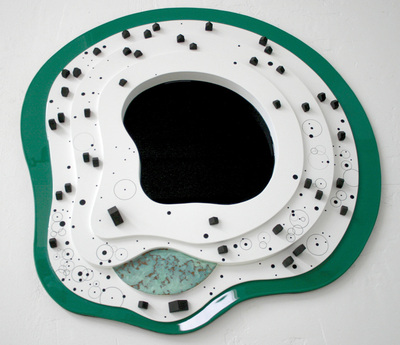 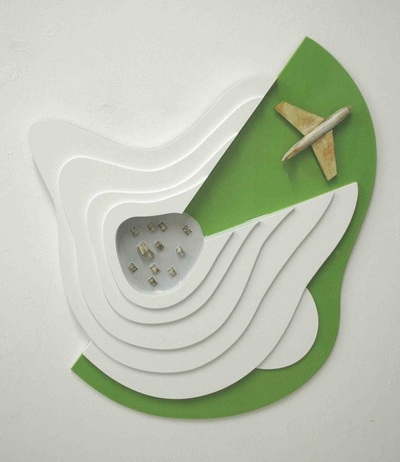 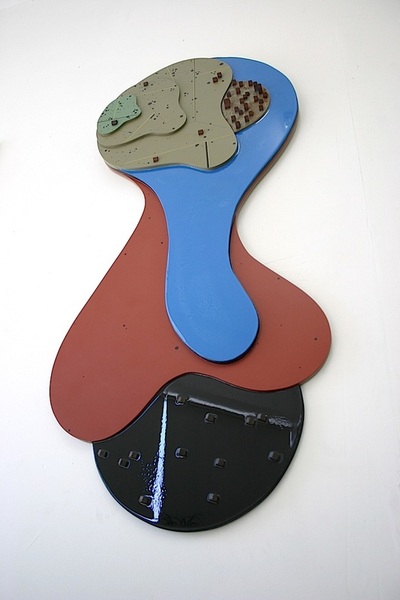 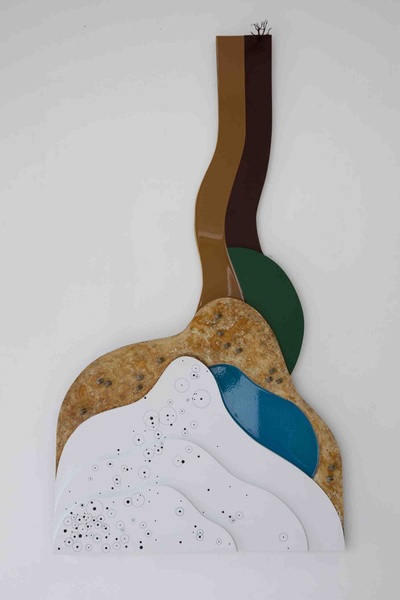 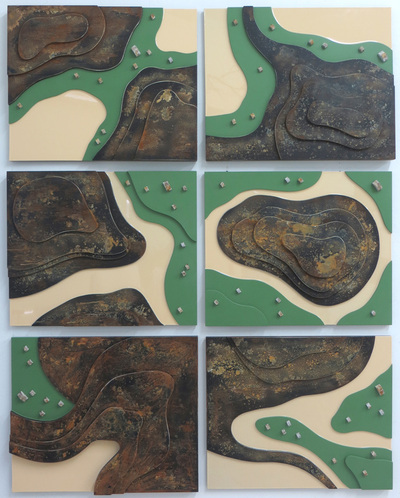 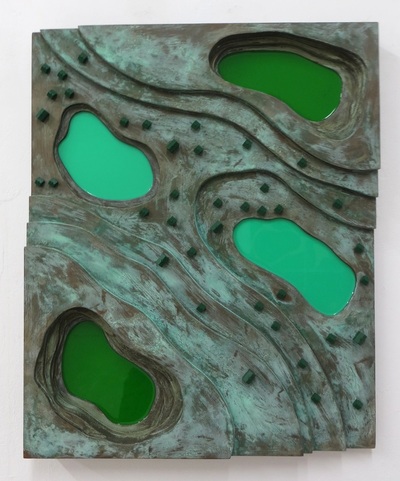 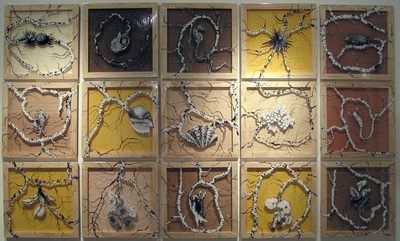 I am, by default, the illustrator of my ideas, even though; I seem to lie to myself constantly. Creating is the most “bestial” process of my conclusions.It is the energy of starting something without exactly knowing the actual outcome.My environments are constants on my aesthetic proposal, which is tied to the parallel need to understand common sense and making my interpretationof it more or less acceptable or understandable.Creating is the experience of being constantly unsatisfied. When this happens, I should redo and lie to myself again.

In them he employs shapes hijacked from the lexicon of constructivist and modernist art and architecture. His wood and acrylic resin pieces are for the most part blank terrains and abstracted map spaces that leave one wondering why they are bereft of humanity. They are also paradoxically freighted with a sense of alienation and a longing for rootedness.

His unpopulated cities, dotted with empty homes, inviting limpid pool and denser suburban outlying areas such as in a work titled From there to here, unmoor the viewer from his bearings and give the impression of freezing moments from both the past and future.

With its biomorphic overlapped shapes and cool color palette, this work both conveys notions of the building of highways in the 1950s and 1960s that bisected neighborhoods and hastened the exodus of businesses and middle-class families from downtown areas to sprawling suburban enclaves, to today’s fragmentation of identity resulting from unrelenting competition in a global arena.

Meanwhile a piece titled I’m coming home baby is loaded with a host of pseudo-sexual and martial underpinnings. At first blush the latticed, black and white vulvic-like housing development, with what appears a man-made waterway flowing from the center, seems not unlike a futuristic community for the rich and famous. But the inviting, flowing waterway is sinisterly penetrated by a nuclear weapon.

It’s title seems to imply a soldier’s refrain to a loved one while preparing to unite back home following the return from wars such as those in Iraq or Afghanistan or other sites of catastrophic transformation. It also reminds us that although the Cold War and the thought of a nuclear holocaust ended twenty years ago, there are still those in the world today whose beliefs and ideologies might sink us further into more drastic devastation. And that’s why all across America’s landscape still today thousands of missiles are housed in silos buried nearby populated centers.

One of his more brightly colored wall sculptures called The Others is rendered in superimposed geometric forms painted in blue, gray, black and a pink that’s almost a flesh tone. Navigating the sculpture and looking at it closely one sees that the dwellings are placed apart on opposite sides of the work in a strict, apartheid type isolation from each other.

It resonates with issues ranging from colonization to immigrant labor, displacement, forced exile, gated communities and even oddly to hopeful communal experiments rising around zones of ruin and emptiness.

Yet another work with martial overtones is We are helping people in which Mendoza has added six cast iron fighter jets to a muted black and white structure reminiscent of a hyper-modern military fortress. Mendoza reminds one that the cost of liberty or democracy in areas across the world, for those rising against dictatorships, foreign offers of assistance can often arrive as wolves in sheep’s clothing.

Mendoza’s bold metaphors for the uncontrollable proliferation of modern cities and the expansion of international communications networks also harkens to urbanism and globalization.

In his own words this series is the result of the constant search for self actualization and symbolic of the spaces which house us, in which we work and where we strive to evolve as individuals and within the framework of the collective.

But to experience Mendoza’s new series and his complex meditations on the subject that our globe during the last century underwent the decolonization of two thirds of its surface gives one plenty to ponder.

These works are a testament to the fact that contemporary society is being reinvented. They are a salient reminder that we are capable of growth, as well as extinction, of trade of constant moving and more importantly of creating new spaces for social change and culture.